Meet Troy, Micheal, Sarah, and Amber, the main characters in this spooky tale of an Immortal Romance. Players who love the tales of the undead are going to love this game, with its excellently chilling audio and high-quality graphics featuring four beautiful characters, each with their own story.

There are two vampires, a witch and one human in this story of undead romance. Think Dracula meets Twilight meets Underworld as you immerse yourself in the world of the bloodsuckers and the dramas that unfold within. Barbados bingo even features vamp themed songs as you play the bonus rounds.

Microgaming is one of the very first ever online gaming companies and a pioneer of the industry have over 850 unique games in their vast portfolio and releasing more brand new exciting and competitive titles year after year.

They are well known for the high-quality of their releases, which prove more and more entertaining and engaging with each new title. Their highly anticipated games always impress and this game is no different from its amazing graphics and audio, making it instantly recognizable as a Microgaming creation.

If you loved this title why not check out some other Microgaming classics such as:

There are many more games that you can try at Barbadosbingo.com.

Playing Immortal Romance - What to Expect

One of the most famous vampires in history has to be that of Irish author Bram Stoker, and his Dracula, published in 1897 and still enthralling readers to this very day. Its pages and its main character, Dracula himself, introduced the world to many of the conventions of the vampire fantasy genre that have been used over and over again since, in books, films, and even online slots!

The story of Dracula and his attempts to spread the curse of the undead while being thwarted by Professor Van Helsing and his team have been recreated in many different forms and over many years.

Now we can enjoy the theme Stoker created, combined with a love of gaming, as we play this online vampire-themed slot game, Immortal Romance:

THE WILD SYMBOL: The wild multiplier symbol in this slot game is represented by the Immortal Romance logo. It substitutes all symbols except the Scatter symbol.

THE SCATTER SYMBOL: The Scatter symbol in this game is represented by the Lion Knocker. Three or more Scatter symbols on the reels will activate the Chamber of Spins bonus game.

CHAMBER OF SPINS BONUS: Offers 1 of 4 bonus games. Each bonus game awards free spins with an additional bonus feature. The games are:

• Troy Bonus: This game is unlocked when you activate Chamber of Spins 5 times. Wins activate Vampire bat bonus where random spins transform into wild multipliers. Wins are up to 6x multiplier. 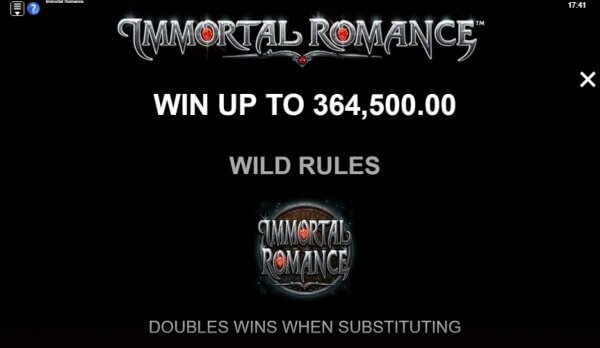 Our Verdict on Immortal Romance Slot

A cool game with loads of amazing bonus games to keep you occupied! Try some online bingo games at Barbados that you might win some.